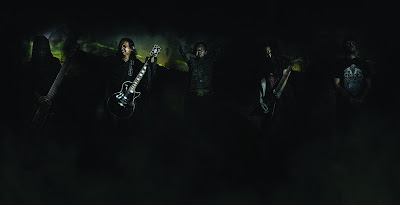 1.Can you give up an update on what has been going on with the band since the recording and release of the new album?

1) We’re quite busy doing some gigs and materials for the next coming release.

2.In July you had release a new album, musically how does it differ from the stuff you have released in the past?
2) Musically it’s not differ from the past releases but lyrically they are more mystic.

3.From 2006 to 2016 there was no music, can you tell us a little bit more about what has been going on during that time frame?
3) Actually in 2008/09 the 2nd album called ‘Bullet’ should be release but due to some problem during the recording process, so it was unfinished. At that time Batara left the band for some personal reason. During that period we are still gigging with new line up and still no new materials until in 2016 the MCD called ‘Bantaigram’ was release under Mamat Rec.

4.Some of your lyrics cover Occultism, Eastern Folklore and Mythology, can you tell us a little bit more about your interest in those topics?
4) This eastern shore has many cultures which existed way back even before the European cultures/myths. Therefore, it is essentially for Langsuir to promote this. An excellent reference book that you can read is The Malay Magic by Walter William Skeat.

5.What is he meaning and inspiration behind the name 'Langsuir'?
5) It means she vampire and we want to bring out something differ from other local metal bands and the name suits us in musically and lyrically.

6.Can you tell us a little bit more about the artwork that is presented on the album cover?
6) The cover artwork on Dirgha Belasungkawa was about a shaman who terrorises the locals with its magic because he was protected by the Ara tree which has many demons. At his old age, as his strengths weakened, he was killed the locals. But the shaman has no regrets and he became the demon of the Ara tree himself. This is basically the story for the first track of the album, Ara.

7.What are some of the best shows that the band has played over the years and also how would you describe your stage performance?
7) It’s hard to remember some of our best shows but for myself it was in Singapore between the year 1994 or 1997, Jakarta in 2012/13 (I guess) and 2019 in KL organized by Legion Music. Dark evil and curse we described our show.

8.Do you have any touring or show plans for the future?
8) 29th February 2020 in Penang with some local acts. August 2020 in Sabah and still looking forward and plans doing some shows outside Malaysia.

9.The band is signed to 'Legion Music', can you tell us a little bit more about this label?
9) A very good label so far and much dedicated to all bands they signed.

10.On a worldwide level how has the reaction been to your music by fans of black and death metal?
10) Not much international exposure yet simply because we have been underground much of the time do local shows. One time in mid 90s we were offered a recording deal by Nazgul Eyrie Productions (now the defunct Barbarian Wrath) but never materialised. Now we are looking forward to be known. Check out our music.

11.Where do you see the band heading into musically during the future?
11) Only future can tell but our integrity is towards this eastern shore; the culture, the myths.

12.What are some of the bands or musical styles that have had an influence on your music and also what are you listening to nowadays?
12) I’m more into 90’s black/death metal stuff and and listening only from the good old days black/death metal bands. Some bands like Absu, Impaled Nazarene, Rotting Christ, Pan.Thy.Monium, Bathory, Immolation, Profanatica, Slayer, Metallica, Megadeth, Tiamat and The Beatles and Duran Duran as well!

13.Before we wrap up this interview, do you have any final words or thoughts?
13) Thanx to you for this interview and having LANGSUIR for your next issue… Cheers from Malaysia!!!

https://www.facebook.com/langsuirband/
Posted by OccultBlackMetal at 10:58 PM