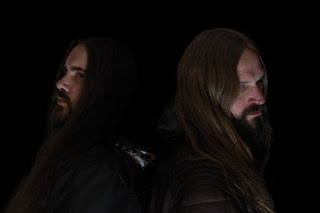 M.S.: From 2000 until 2011 I had a technical death metal band called SYMBIONTIC with which I released a Promo and 2 records gaining some attention in the underground scene here in Germany. When we quit the band the singer Volker and I decided to form a new band. We called it HURAKAN and also released one record with it. Due to the well-known ups and downs this band also ended in 2015. At that point of time Volker had the idea to write some doomy songs and I really loved the idea. So I wrote an entire album, which is now HRAUN! But I already knew that it was better to look for new musicians to release this fantastic material. I remembered S.B. whom I had met just a few times in early 2000…back then I was overwhelmed by his vocals and also the passion he has for his music. Just the same as I so I contacted him, first asking if he´d like to sing some backings, but when he instantly agreed I asked him if he wanted to become the lead singer of HRAUN. And here we are!

S.B.: I remember, M.S. contacted me after he saw a live video of my main band „Halphas".
I really appreciate him as a musician and as a person. So I didn't hesitate for long.

2.You have a new album coming out in April, can you tell us a little bit more about the musical style you went for on the recording?

M.S.: As said my first idea was to walk a doomy path. But all the music I write includes several influences, so quite naturally the style is somewhat diverse. I would define it as dark and heavy, not doomy in the sense of a grave tempo, rather in the lyrical and musical penetrating power. We call it Doomed Dark Metal.

3.Some of your lyrics also touch on Occultism, can you tell us a little bit more about your interest in this topic?

M.S.: As the term says to me it is a search for encrypted meaning. I see it as a way of thinking rather than acting. So in my lyrics I express different ways to interpret and deal with reality.

S.B.: My personal believes are rooted in different types of occultism. However, explaining this would go beyond the scope of this interview.

4.What are some of the other lyrical topics and subjects you have explored so far with your music?

M.S.: What happens when you have to face death and you try to rise up against it a last time, how can you deal with the eternal war inside yourself, the realisation of your own pettiness, losing your fight against depression, death wish…

5.What is the meaning and inspiration behind the name 'Hraun'?

M.S.: As I love language I also love specific words and/or their tone. So I came upon „Hamarinn“ and „Hraun“. When I translated „Hraun“ into German I immediately knew that this would be the name of my next band! Tone and meaning in a perfect symbiosis. It fitted exactly the dark and heavy direction in which I wanted to go with this band.

M.S.: Rebecca Weik is a friend of S.B. and I had seen some of her fantastic pieces of art before. So I contacted her if she wanted to create our logo and she agreed. I then was overwhelmed by the final version of it so I thought that she also should make our cover. And what should I say: the cover perfectly symbolises the black molten essence of darkness and heaviness that our music has. You see those energetic bubbles and what I would call synapses which deliver the energy…and of course right in the centre you observe what I would define as the power of defiance and self-assertion.

M.S.: Right now I would say that we remain a duo, but who knows…

S.B.: Maybe we will add some one if we decide to play live

8.On a worldwide level how has the reaction been to your music by fans of black and doom metal?

M.S.: At this point of time I cannot answer this question because I guess that nobody knows that we exist as a band. But once the album has been released I hope that lovers of that kind of music will become aware of our record. And then I am sure that many will observe its power. I mean S.B. is one of the best extreme singers with a broad vocal range.

M.S.: We will definitely write more songs using clean vocals, experiment with other instruments (this time we additionally used the Irish Bouzouki) and presumably will change the tone a bit. But we will stay dark and heavy!
S.B.: I will do more of my deep clean vocals for sure.

M.S.: There are a lot of influences, of course. I mean, music makes my life since I was a child, so I could start with Pink Floyd, The Beatles, Led Zeppelin and then add hundreds of other bands and styles…
So I really can´t say what influenced me directly when writing for HRAUN - it is rather what made my compositional style and what influenced my way of playing my instruments.
The most important influence on my guitar playing are Morbid Angel and Death, how I nowadays compose my songs is an approach to song building influenced by Katatonia, Opeth, Paradise Lost and Dead Can Dance.

I love many bands and I still buy a lot of records but I keep listening to the same albums over and over again. Those I listen to the most are probably Morbid Angel´s Covenant, Katatonia´s Viva Emptiness, Gospel of the Witches´ Salem´s Wounds and  Opeth´s Blackwater Park.

S.B.: Type O Negative, Bethlehem, Bathory and Ulver inspires me al lot. But I would say most important to me are The Cure and The Doors.

M.S.: Spending time with my family…

M.S.: Thank you for giving us the opportunity to speak about what we love to make – music. Our greetings to all the maniacs out there who also believe in the power of music and arts in general! And our gratitude to those still spending their money on records and still go to concerts.

Posted by OccultBlackMetal at 1:47 AM