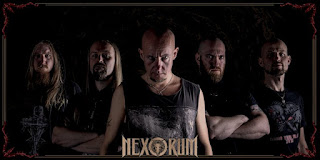 1.For those that have never heard of you before can you tell us a little bit about the band?

Nexorum is a blackened death metal band based in Trondheim, Norway. The band includes members from various Norwegian metal bands, the most relevant being Keep of Kalessin, Chton, Khonsu and Vecordious.

The band formed back in 2017. We have spent these last years writing, recording and mixing our debut album, Death Unchained.

2.In March you have a new album, can you tell us a little bit about the musical style that you went for on the recording?

Back when we started talking about forming this band this was very important for all of us.

We did not want to be a tech death metal band and certainly not another old school black metal band. We wanted the music to be heavy as fuck, groovy and “easy” to perform live, but also atmospheric, brutal and with a good song structure. From there we just evolved through each song and ended up as we are now.

During this writing process, our guitarist Roger has done a lot. He has his own home studio and he has a good ear, so we recorded the entire album ourselves with him as producer. Drums and vocals in our rehearsal place, and guitar and bass at Roger’s house.

3.Most of the other band members are also involved with other bands, what is it that you bring into the music of 'Nexorum' that you are not able to do with your other groups?

Well, mainly the death metal type of writing. Khonsu and Keep of Kalessin are very melodic and majestic. Nexorum is more brutal and in your face.


4.Some of your lyrics cover Satanism, Occultism or Left Hand Path themes, can you tell us a little bit more about your interest in the dark arts?

Like so many artists before us, be it musicians, writers, painters, sculptors.. you name it, we find the stories, myths, legends and the over all concept of Satan very interesting, and draw a lot of inspiration from it. This shines through in a handful of the Nexorum lyrics.


5.What is the meaning and inspiration behind the name 'Nexorum'?
Nexorum derives from the latin word Nexus, which literally means "binding together" or "connection". We chose this name since it represents the way we got this band together and how we create our music as a band.

6.Can you tell us a little bit more about the artwork that is presented on the album cover?
We wanted something that captured the essence of the album, both musically and thematically. We sent an email to Rafal Wechterowicz with some of our visual ideas, along with a couple of songs and lyrics, so that he could get a feel of what we were all about. This is what he came up with, and we really liked it.

There's no stronger symbol for death than a human skull, so that had to be the center piece of the artwork. The snakes and chalices are slight references to some of the lyrical content.

Robin, our bass player, did the layout for the album. He put one of Gustave Doré's illustrations from The Divine Comedy in the background to put an extra layer to it all, as well as adding the frames, which ended up looking pretty sick.

Robin who also plays in Keep of Kalessin is a real artist. Design and drawing is something that he is really good at.

We will have our first concert with Blood Red Throne in March.
It will be aggressive and we are certain that people will feel our energy from the stage.

8.Do you have any touring plans once the new album is released?
Not yet, but we will be an active live band.


9.On a worldwide level how has the reaction been to your music  by fans of black and death metal?
So far, so good.
It seems like we are hitting a nerve. Maybe people are a bit tired of the all the same stuff that is out there and really like the sound of the band and the production of the songs. The open song structure, the groove and the catchy riffs.

10.Where do you see the band heading into musically during the future?
We are already working on 3 new songs and will aim to play as much live as possible.
The new album will be insane, although we are early in the writing process I can feel and hear already that we will nail this one as well.
It will be Heavy, groovy and brutal.


11.What are some of the bands or musical styles that have had an influence on your music and also what are you listening to nowadays?
Well, what can I say.. We are Norwegians and have all grown up listening to all of the Norwegian bands from Burzum to Dimmu Borgir and everything in between.
The band is trying to do things a bit different and I think we sound unique. I don’t think I've heard any bands, at least from Norway, that play quite like us.
I personally listen to a lot of Wardruna these days.

12.What is going on with some of the other bands or musical projects these days that some of the band members are a part of?
They are lurking in the shadows with things. Stay tuned.


13.Before we wrap up this interview, do you have any final words or thoughts?
Thank you for the interview and to everyone who read this. Thank you and please continue the support by playing our music. Hornz up!