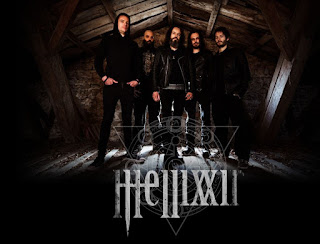 1.Can you give us an update on what has been going on with the band since the recording and release of the new album?
We finished our new music video for the song “Oxymoronic way of life” (https://youtu.be/kBu9kl4rOuQ). We plan to record a 2nd one during the summer 2020. We also try to book some shows from next September and we’re working on new songs.


2.In October you also had released a new album, musically how does it differ from the stuff  you have released in the past?
The Black Fortress is our 3rd full length album, was released on october 18th. In my opinion, it has by far the darkest but at the same time the most refined and subtle atmosphere we ever created in our music. We worked a lot on the sound, the lyrics and visuals. We are pretty proud of the end result. To my mind, it differs from the previous albums and demos because this album is much more extreme, aggressive and our new singer Alexandre comes from the Black Metal scene. However, the melody and the main riffs remain what Hellixxir always did. At the moment, it sells pretty well thanks to our label Music Records, a vinyl disc is now available.

3.This is also your first release since 2011, can you tell us a little bit more about what has been going on during that time span?
In 2011, we also lost our bassist/singer and true friend Camille in a tragic car accident, so we needed time to go on.

4.What are some of the lyrical topics and subjects the band explores with the newer music and also how would you describe your progress as songwriters over the years?
The Black Fortress is about loss of self, ordinary madness and absurdity of today's era expressed in a sharp and dark Thrash-Black metal. It also refers to the band's headquarters, an old manor house in northern Isère that has a certain historical past, in which Hellixxir composed and recorded the album. Songwriting is a very intuitive process for us, so the main goal is to keep spontaneity, simplicity and the good feeling.

5.What is the meaning and inspiration behind the name "Hellixxir'?
Hellixxir is a combination from various words: first the “Elixir”, as the magical or medicinal potion, then “Hell” for the spiritual realm of evil and suffering and finally “XXI” for the 21st century.

6.Can you tell us a little bit more about the artwork that is presented on the new album cover?
All the pictures were taken in our headquarters in order to illustrate the concept of The Black Fortress. As for the songwriting, we worked quickly with no particular effects to keep spontaneity. Looking at the artwork produces me a mysterious feeling between dream and reality in a very dark atmosphere… did you see the ghost on the cover?


7.What are some of the best shows that the band has played over the years and also how would you describe your stage performance?
We want to play simple but right, with the good intensity and feeling: that’s all. Sobriety is the main word. We shared the stage with international bands such as Entombed, Belphegor, Melechesh or Decapitated, such an honor! But the good show is not necessary the biggest one: we want to share emotions and have fun.

8.Do you have any touring or show plans for the new album?
Normally we had several concerts from March to June 2020, but everything is postponed because of the COVID-19 situation. We will see later when everything will be safe.

9.The new album was released on 'Music Records', can you tell us a little bit more about this label?
Jeff and Valentin are doing a good job for us in France but also all over the world, and working with a small structure allowed us to go fast.

10.On a worldwide level how has the reaction been to your newer music by fans of black, death and thrash metal?
No idea! Hellixxir is a small band but our reviews have always been positive, honestly. We are thankful of that.

11.Are any of the band members currently involved with any other bands or musical projects these days?
In the past we all played in different bands but we do not have enough time now. Hellixxir has always been my true project. I work sometimes for friends by recording guitars, the last one is the song “The Worship Of The Sun” (https://www.youtube.com/watch?v=r3fJRWFSVT0).

12.Where do you see the band heading into musically during the future?
We live and enjoy the present first! There is no particular plan for the future but we still have inspiration and ideas.

13.Before we wrap up this interview, do you have any final words or thoughts?
Thanks a lot for your support and all the job you do for the metal scene. Let's kill the Covid-19!

Posted by OccultBlackMetal at 12:58 AM