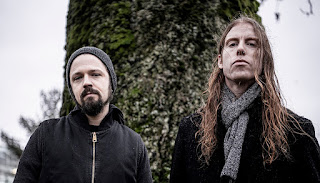 We’re Ritual Dictates from Vancouver BC, Canada. We’re a two piece metal band consisting of Ash Pearson and myself.

2.You have your first album coming out in April, can you tell us a little bit more about the musical style you went for on the recording?

Ash and I were both in heavier metal bands before we joined 3 Inches of Blood, and that’s kind of what we were revisiting when we started writing songs. More death and grind based metal music.

3.Most of the band members also have experience playing with other bands, what is it that you bring into the music of 'Ritual Dictates', that you where not able to do with your other groups?

More creative freedom, I guess? 3 Inches of Blood was a band before Ash and I joined, and although I wrote lots of 3 Inches of Blood songs and enjoyed doing so, I couldn’t really steer too far off the style that was 3 Inches of Blood. With Ritual Dictates, because we are a new band, we can kind of do whatever we want, and that’s what we did with this record.

4.What are some of the lyrical topics and subjects you have explored so far with the music?

Ash is the primary lyricist for this record, and I co-wrote lyrics to a handful of tunes.

Our inspiration for Ritual Dictates lyrical themes come from a range of different places. Sometimes we'll explore a theme like hypocrisy, or living forever. Other times we’ll take a line from a song or a book we read and expand on the story and write lyrics around that, like a quote from Neil Peart’s book, or William Blake, or even a line from a Blue Oyster Cult tune. We’ll take inspiration from something like that and run with it in our own way.

5.What is the meaning and inspiration behind the name 'Ritual Dictates'?

I can’t remember exactly what the discussion was, but Ash said "ritual dictates" in a conversation we were having, and I just said that’s our band name. What a story!

The artwork for the CD and LP was all done entirely by Rheanna Fancypants of Vancouver. She is an incredible artist and one of my best friends. She also did the graphic layouts for all the EP covers that we released prior to the album.

The EP artwork for “Given to Despair” was done by another great artist from Vancouver, Megan Richter. And the photograph on the cover of the “Terror of Time” EP was shot by Derek Carr.

We haven’t played in quite a while, but I suppose the Black Requiem Mass show in Vancouver with Kafirun, Omnipotence, Firecult, Finite, and illithid would be my favourite so far.

We’re playing in Victoria BC on April 16th at Cavity Curiosity Shop, followed by a show in Vancouver on April 17th at The Black Lab, and April 18th at Neptoon Records.

9.You also have a few guests on the new album, can you tell us a little bit more about who they are and also their contributions to the recording?

Shawn Hache was a guest vocalist on “Dominance and Will”. He performs in Night Profound, Mitochondrion, Auroch, and Reversed.

And of course, Danko Jones! He laid some vocals down for “Poisonous Proclamation”. Our engineer Michael Kraushaar also provided some vocals for “Aperiam in Porta”, and Shane Clark who was in 3 Inches of Blood and Bison performed acoustic guitar in “Given to Despair”. It was rad having them all contribute.

10.On a worldwide level how has the reaction been to your music by fans of extreme metal?

So far so good! We’ve only released two songs so far, and the reception seems to be a positive one. We have one more single to release before the album, and another couple of videos, so let’s keep this train a rollin.

We’ll always be a metal band, but I’m not afraid to explore new influences and inspirations. So, there will be surprises on the next album for sure.

Lately I've been listening to Orville Peck a lot. The Footloose soundtrack is on my record player now, and the last couple of records I've spun were Type O Negative "Bloody Kisses" and Diana Ross & The Supremes Greatest Hits.

So many bands and styles have shaped my style, but a few bands off the top of my head that really inspired my metal direction were

Zyklon-B, Assuck, Tsatthoggua, and Order from Chaos. Of course, Slayer and Morbid Angel were among the leaders of the pack.

Now that the sun is out more I’m on my bike quite often. It’s a fixed gear, which keeps my legs in shape. So yeah, bike riding. And taking pictures of my black cats and my dog. He’s a corgi.

14.Before we wrap up this interview, fo you have any final words or thoughts?

GIVE IN TO DESPAIR! 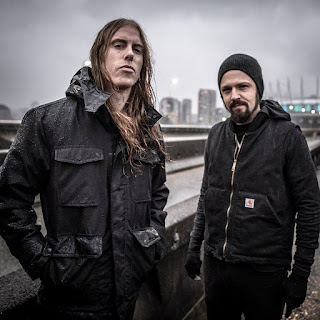 www.facebook.com/ritualdictates
Posted by OccultBlackMetal at 11:27 AM