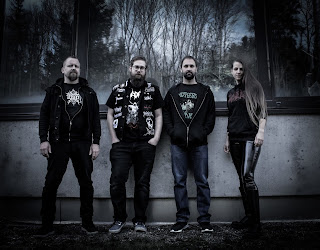 Matthias: My name is Matthias. I am the voice of Funeral Pile. Annike is the rhythm guitarist. She brings the hard riffs, but also the melancholic parts. Ralf is our lead guitarist.  He serves the melodies and grooves. He can write new riffs and lyrics twice as fast as anyone else in the band. The fourth member is Martin, our bass player. He arranges the songs and creates the drum tracks. In general he takes care of everything during the recordings, like a producer.

2.Recently you have released your first full length, can you tell us a little bit more about the musical style that you went for on the recording?

Matthias: When we started to make music again, there was never any conversation about the direction or style of our music. We just went for it. Each of us has a different musical background. Ralf is more into heavy metal, Annike and myself are big black and death metal fans, and Martin just loves any kind of extreme music. Everyone brought his or her musical preferences into the sound of Funeral Pile and it was revised until everyone was really satisfied.

3.The band was broken up for 10 years, what was the cause of the split and also the decision to reform?

Matthias: Some of us left our hometown for their studies. We couldn‘t continue the rehearsals, because of the big distance. But we never lost contact with each other. After 10 years we met for a few beers and it quickly became clear that we still harmonize well, personally and musically. Ralf and Annike composed the first riffs immediately and I wrote the lyrics for the song "Funeral Pile". Since we had no experience in recording, we quickly came up with the idea to bring Martin on board. He immediately agreed. Something better couldn't have happened to us, because he had already released several albums with other bands and performed live as a bass player with Waldgeflüster. He is the mastermind behind the sound of Funeral Pile.

Matthias: The biggest lyrical part of the album comes from Ralf. He is an insanely good and fast writer. He draws a lot of inspiration from books he likes to read. Klondike, for example, is a tribute to the "Tales Of The North" stories of Jack London, Nameless City is inspired by the horror story of the same name by H.P. Lovecraft....

In my writing, I am fascinated by Death and unjust cruelty. Annike writes very personal lyrics in which she processes her experiences.

5.What is the meaning and inspiration behind the name 'Funeral Pile'?

Matthias: When we founded the band in 2008, most of us were big fans of the bands Unleashed and Amon Amarth. Back in the days they were huge musical influences and we chose the band name Funeral Pile as a reference to the burial of Vikings, that were sometimes burnt on a wooden pile. Some of the heathen tribes thought, that the smoke of the fire would carry the dead to his afterlife. In the song Funeral Pile the word is used as a synonym for a funeral pyre respectively a stack.

Matthias: The fantastic artwork was designed and drawn by Joan Llopis Doménech. He has done many brilliant covers for different bands like: Wolvencrown, Sojourner, Uprising....

We sent him our album and he was inspired by it. After only 2 weeks the album cover was finished and we were really excited about his work. The main part of the cover really refers to the lyrics of our first song "Funeral Pile" which is also our band name. It's about the crimes of the church and the inquisition, how hundreds of men and women were burned at the stake. A cruel spectacle for the whole family ;-)

9.Has the band done any live shows or open to the idea?

Matthias: We (re)started the band with the start of the pandemic. So rehearsing was impossible at the beginning and we focused on songwriting and recording. We surely want to play live shows in perspective. But as everyone of us has little kids it might take some time until we are able to hit the road.

10.Currently the band is unsigned, are you looking for a label or have received  any interest?

Matthias: Before we released the album digitally, we were looking for a label. We wrote to about 40 labels, but only got a response from 2 of them. They were very honest and couldn't accommodate us because Corona was at its peak at that time and no one knew what would happen next. Financially, without concerts and festivals, most labels were doing badly anyway. But we hope that now that our album is out, a label will be interested in us and willing to work with us on future releases.

11.On a worldwide level how has the reaction been to your music by fans of black metal?

Matthias: So far the response to our album has been really fantastic. We received E-Mails from the U.S., Australia, Brazil, Greece… from people who really like our album. I can not say if all of them are Black Metal fans or our music attracts also fans of other genres. There have been requests for CDs and LPs. We didn‘t expect this in these modern times, so we are a bit unprepared. We are thinking of pressing and selling CDs by ourselves.

Of course there were some critical voices, but that‘s ok, because we don‘t have the ambition to please everyone.

Matthias: I think we will continue the direction we took on the first album. A mixture of different genres, but rooted in Black and Death Metal. The first riffs, lyrics and song structures are already done and we all can't wait to record again.

Matthias: I can only speak for myself, but my most listened genre is definitely Black Metal. From newer stuff like: Wormwood, Orm, Vanhelga.... to older stuff like Windir, Setherial, Nagelfar.... But also Death Metal, Classic Rock, Oldies.... end up on my turntable.

14.Before we wrap up this interview, do you have any final words or thoughts

Matthias:  Funeral Pile would like to thank you for the great interview. And to all friends and supporters out there, thank you for your loyalty and support. We are very proud to be a part of this great metal culture.

Posted by OccultBlackMetal at 5:16 PM