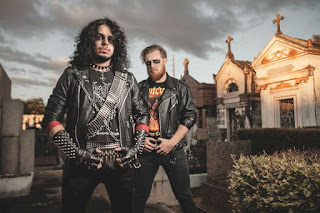 Yes! We are promoting a lot the new album, there are some reviews coming, interviews, and we just recorded a video clip for the song “Drunk by Goat’s Blood, which will be available soon! We are also composing new material for the next album, as we can’t play any shows yet.

2.Recently you have released a new album, musically how does it differ from the ep that you had released in 2018?

The debut album has a way better production. We had more time to compose, produce, record and mix the album. The songs also have more influences from Heavy and Speed Metal, mixed with the raw Black/Thrash from the first EP. I also add some high-pitched screams that I couldn’t do before, double guitars, melodic solos and stuff, so we can say that it is a much more complete and well done album.

3.A lot of your lyrics cover Satanism, Witchcraft and Occult themes, can you tell us a little bit more about your interest in the black arts?

These are characteristic themes of this style of metal, so it's normal for us to write about this kind of thing. It’s not something that we’re very thorough or take seriously, we just like the theme, the imaginary, and it's a way to confront conservative and religious people with our art. Talking openly about Satan, anti-religious and occult things is still cool and certainly shocking for some people, and is and will always be part of Metal.

4.What is the meaning and inspiration behind the name "Evilcult'?

It’s just “Evil cult” or “Cult of Evil”, but together in one word. First, we wanted a short name, easy to speak, and that had not been used by another band. So I think Evilcult is all of that, and it sounds pretty evil, haha. It does not have a very deep meaning.

The artwork was based on an image that comes to my mind during the writing of the album. It’s exactly what is there, a satanic ritual in the woods, on a dark night with a red full moon, with women and witches summoning the devil through fire and the bloody pentagram. We didn't want something conceptual and meaningful, just something with an evil, satanic and very METAL atmosphere, but it's cool that you can also notice some references from the cover art in the lyrics. Obviously, it’s also a hand-painted art, in the style of albums from the 80’s that we really enjoy.

6.The band started out as a solo project before expanding into a duo, are you open to adding other members so you can play live shows?

Yes, we already have guest bass players at live shows, videos and some rehearsals, so it may be that in the future we’ll fit a fixed member in the band. The songs are also more complex now, with double guitars and stuff, so it is possible that we’ll add a second guitarist, starting with the live shows. We’ll see what happens in the future.

7.On your previous release you also done a 'Cruel Force' cover, what was the decision behind doing your own version of one of their songs?

We just love Cruel Force. Their two albums are masterpieces of black/speed/thrash metal, and we consider that they were not just copies of other bands. Despite having a characteristic style, there’s something magical there. They influenced me a lot to shape Evilcult's sound in the beginning, so there’s nothing more fair than paying homage to them in our first EP. Of course, we have influences from different Metal bands and genres, but they are certainly a big influence. Victim of Hellfire is a great song and a metal anthem from this century.

8.So far you have worked with 'Awakening Records' and 'Cianeto Discos', do you feel these labels have been very helpful when it comes to getting your music out there heard?

For sure! Cianeto Discos is a great partner for us here in Brazil. The EP was released here in partnership with 3 labels: Cianeto Discos, Forbidden Music Distro and Escória Distro. They helped us a lot to release and distribute this material. And for the debut, we signed with Awakening Records for the exclusive worldwide release of the CD format. They are great guys, very professional, and helped us a lot to raise the level. They trusted in our potential and now the album is being widely distributed. Having a label behind your name, gives a more professional image to a band, and helps a lot in the whole process of production, pressing and distribution of the material. We also signed with the German label Diabolic Might Records for the vinyl version of “At the Darkest Night”, which will also be distributed worldwide and will be released by the end of this year.

9.On a worldwide how has the reaction been to your music by fans of black, thrash and speed metal?

The reactions are being great! Positive reviews are coming from several different countries, such as Mexico, Brazil, Greece, Germany, Poland and also several good comments on the YouTube videos and posts on social media, songs added to playlists and podcasts and good words for us personally, too.

Fans of these styles are true Metal maniacs, that means a lot to us!

We do not intend to escape the style prevalent in the early records. We’ll certainly test new things and add some elements, as we did on the new album, but never change drastically or make something over-produced. Evilcult will always be true, fast and evil Heavy Metal.

Just as we listen and love many classic bands, we also love and are inspired by new bands. Nowadays we are listening a lot to Vulture (Ger), Diabolic Night, Bütcher, Ambush, Hellripper and many others. From the classics, we can mention Mercyful Fate, Exorcist and early Running Wild. We are also enjoying some bands that use keyboards or synthesizers, which create an atmosphere of occultism, mystique and those things.

Thanks for the space, and for the interest in our work! Listen to our new album, bang your heads ‘til death and be prepared for our first official video clip! Soon we’ll have more news, Hell Awaits!

Posted by OccultBlackMetal at 11:02 PM