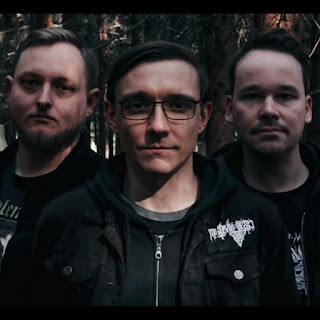 We are Heksebrann, a three-piece band from Görlitz, Germany. Mario is our bass player, delivering filthy HM-2 bass sound and guttural vocals. Julius is the main voice of Heksebrann and guitarist. Marko is hitting the drums with no excuse. We play heavy rock for headbangers and people who love hard music. Recently, we released our full length “Spiritual Descending”. Give it a listen and if you have the chance to see use live, grab a beer and come along!


2.So far you have released a demo and a full length, musically how do they both differ from each other?

Actually, not as much as you may think. Some songs from the album were already written before the demo. The idea behind the “The Hunt” demo was to deliver a first impression of our musical style, so every song is a little different. Our debut album “Spiritual Descending” also covers a wide range of styles, but all in all it is a more complete piece of art. There is some kind of common theme through the whole Album and everything from Artwork, Lyrics to Songwriting works together. You will hear on both records that you’re listening to Heksebrann.


3.Some of your lyrics also touch on the occult, can you tell us a little bit more about your interest in this subject?

It is more like a general interest in occult and dark themes. We often use these motives to tell stories that can be reflected into the present time. For instance, people still search for the culprit for their unfounded fear. If we come up with an inspiring story around the subject, we might write a song about it.

Beside the witch hunt theme, there are 3 major topics that we include in our lyrics. There is often a reference to the elements that stand above all and which people seek to control. The motif of failed journeys where the lyrical subject chooses a path with a twist that eventually leads to its failure. Last but not least, songs about the supernatural, consciousness and spirit of oneself.


5.What is the meaning and inspiration behind the name 'Heksebrann'?

Maybe it seems a little strange that a band from Germany has a Norwegian name. Well, here is the story. Just after forming the band in 2016 we made a trip to Norway to spend our holidays and work on some music ideas that even made it to our recent album Spiritual Descending.
While driving through the country, we were listening a lot to Kvelertak’s Nattesferd. Eventually, we chose Heksebrann as our band name, because it fits quite well to our lyrical content and the atmosphere we want to create.


6.Can you tell us a little bit more about the artwork that is presented on the album cover?

The idea was born when I was hiking in the woods near our town. There is a little old cabin deep inside the forest that looks like an old witch house. I thought about how cool it would be if we could rehearse in there. With this idea in mind we talked to the graphic artist Marco Thundergoat. With his help with developed the artwork even further and added a witch that is watching the cabin and the spirits that are called by the music. It’s good to have someone who can reproduce your visions and work so close together with you. He did an awesome job and we are really confident with the artwork of Spiritual Descending.


7.What are some of the best shows that the band has played so far and also how would you describe your stage performance?

We already played a lot of cool Shows. One for example was in Poland on the Alter Piknik Festival. It is a DIY Festival with a nice spirit and the location is in an old factory. You should check it out! And of course, every show in our hometown is very special, because our Basta! is very small club, the bands are standing on the floor, eye-level with the crowd. There is no gap between them and no big stage. Shows like that can get very intense and completely weird.
On stage we will always give 100% no matter how many people are watching. We like loud heavy music and just want to play live.


8.Currently you are unsigned, are you looking for a label or have received any interest?

Yes, that is right. We were searching for a partner to release our album on vinyl, but as we did not find the right one, we decided to do it on our own. It is quiet some work, but you have the advantage that all is in your own hand, and you can manage things as you want. For the future we are looking forward to find a label that likes our music and is interested to work closely together with us. (The quality of the music is what matters the most, not how many records you could sell!)


9.On a worldwide level how has the reaction been to your music by fans of underground metal?

The feedback from the people was really good and we are very pleased about that. You can often read that it is hard to fit our music in any genre. I think that is very positive, because that is what makes our music very unique besides our sound. We want to create something we like and people seem to do so, as well. This is the greatest reaction you can get.

It is impossible to give you an exact answer to this question. We want to use more clean vocals but don’t lose the hard and forward going character of the music. We will also work with some more variating guitar sounds and maybe we can find other undiscovered and unique elements, that will enrich our music. In the end, we are influenced a lot by the world around us. Things we see, hear, feel and consume. So our music will always be a mirror of our current feelings and situation.

I think that we we process our influence more unconsciously. Perhaps every band that you listened to more extensively in the past will have a influence on your songwriting in some way. Our sources of inspiration vary a lot. But to name some great artist: High On Fire, Kvelertak, Solstafir,...
At the moment, Julius is listening a lot to Elder, Opeth and blues stuff. Mario is raving on Kvelertak’s last record Split or Idle Hands’ Mana and Marko’s current favourite is Hällas’ Conundrum.

Hiking is a hobby from me along the music. It’s sometimes necessary to be outside in nature and away from civilization. You can get rid of all the shit that bothers you in everyday life and recharge your batteries. Julius likes to travel, enjoys a good movie and likes to tinker with his equipment. Mario is into indoor plants, got more than 60 of them and hang out with buddies and drink a good beer.

We are planning the release shows for the album in the end of the year and will also release our first music video. Stay tuned and whenever you have the chance to see us, come along and let us have a good time together! Thank you very much for the Interview.

Posted by OccultBlackMetal at 11:38 AM