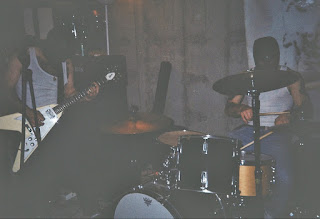 1.Hi,
We are a punk band from Bermeo, a little town in the Basque Country (North of Spain).
Eneko is the drummer and i (Josu) guitar + vocals.

2.So far you have released a demo and a 2 song ep, musically how do they both differ from each other?

3.What are some of the lyrical topics and subjects the band has explored so far with the music?
3. Lyrics generally talk about war and another atrocities.

4.What is the meaning and inspiration behind the name 'Puro Odio'?
4. Puro Odio is the translation of "Pure Hate" a track of the "Pick your king E.P." from Poison Idea.

5. Our friend Andoni did the painting for himself.
Its about the actual pandemic of Covid 19.
We liked the work and we used it for the cover of the tape.

6.Currently there are only 2 members in the band,are you open to expanding the line up or do you prefer to remain a duo?
6. No, were always going be two.
We have had proposals from good bassists but we arent interested.

7.So far you have worked with 'Tape Worm and Sentient Ruin Laboratories on the physical copies of your releases, do you feel these 2 labels have been very helpful when it comes to get your musci out there heard?
7. So far our works have been self released.
Until "Mendeku Diskak" proposed us to release the demo tape in vinyl, due to this release Sentient Ruin contacted us to release it for the US market.
Obviously a label reaches more people and markets that we do.

8.On a worldwide level how has the reaction been to your music by fans of black metal and punk?

8. We have always played for punks and metalheads, who apreciate the band, maybe the metalheads like more our music because its primitive and clumsy. Overall, we have received good feedback.

9.When can we expect a full length and also where do you see the band heading into musically during the future?
9. Weve got couple of tracks finished, but not enough as to release an LP.
We review and chew a lot each song..we don't settle for the first thing that comes along.
Hopefully by the end of this year we will have enough material to release a (F**ing) good LP.
Music follow similar style, maybe a little darker and more twisted but on the same vibe than previous songs.

10.What are some of the bands or musical styles that have had an influence on your music and also what are you listening to nowadays?
10. Mainly Basque classic punk acts, also old punk Spanish bands, British Oi! and early American HardCore.
Today im listening: Nö Class, Chubby and the Gang, Möwer, Devil Master...

11.What are some of your non musical interests?
11. Skateboarding, motorbikes, records...


12.Before we wrap up this interview, do you have any final words or thoughts?
12. Puro Odio somos Mil Hombres, la banda mas dura del planeta.