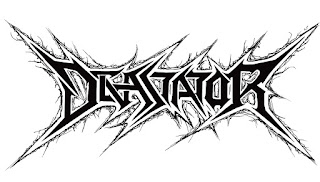 1. Can you give us an update on what has been going on with the band since the recording of the new album?

Devastator: We’ve been mainly focusing on press and preparing for the release of the album, ultimately trying to make the best out of a bad situation with this coronavirus pandemic putting gigs to a stand-still.

2. You have a new album coming out in July, musically how does it differ from your previous recordings?

Devastator: First and foremost, we have grown as a band and as musicians, since 2018 we’ve really come into our element and the compositions really represent that on ‘Baptised in Blasphemy’, we think the fans that have been with us since the first demo will definitely hear that when they listen to the new album.

3. Some of your lyrics cover satanic and occult themes, can you tell us a little bit more about your interest in the dark arts?

Devastator: Satanic themes are imbedded in Heavy Metal, period. It’s been that way since the 70s with Black Sabbath and Black Widow, we are merely embracing the ideas and themes that our forefathers in slightly later bands like Venom, Bathory, Hellhammer and Slayer carved for us.

4. What are some of the other lyrical topics and subjects you have explored so far with the music?

Devastator: Sex and Death! After all, Lemmy said it himself: “the answer to life’s mystery is simple and direct…”.

5. What is the meaning and inspiration behind the name 'Devastator'?

Devastator: It was better than the original band name!

Devastator: It’s an original concept by our drummer’s tattoo artist, Chris Hancock. We had a few preliminary sketches from artists of what we originally intended to have but once we received that art, we knew it was the one!

7. What are some of the best shows that the band has played so far and also how would you describe your stage performance?

Devastator: The Black Tor Gathering festival, that was insane! That was organised by Steve from Blackwood Productions and Old Corpse Road, it was held at the tallest venue in Britain at a height of 1732ft above sea level, hell of a dizzy head. The first ever home town headline show in the Sitwell Tavern, Derby was great and an amazing experience, of course obviously anything Phil from Torturous Promotions puts on in Nottingham. He was the first promoter to give us a chance and booked us for our very first show when we were a three-piece, ever since Nottingham has been a strong second home for us.

Our stage show to us is a Rock n’ Roll show, you come to SEE the band not just to listen, so naturally, we adopted the blood and antics that we get up to. We add the idiosyncrasies of each member of the band and project that into the performances but we also have fun and actually enjoy what we do, that reflects back in our show.

8. The band originally had intentions on playing Bay Area thrash metal but now plays more of a blackened thrash metal style, what was the decision behind going into this musical direction?

Devastator: We sort of wanted to play a Testament-ish style of Thrash in the beginning but as other members joined so did other stronger influences and they very quickly started to make their way into our music. It was a mutual love of Sodom and Venom that really brought us together, there was no real plan to play Black Thrash it just became that way. We embraced it, it was a quick but natural process.

9. On a worldwide level how has the reaction been to your music by fans of black and thrash metal?

Devastator: Since signing with Clobber Records and working with an excellent PR company in Imperative the reception worldwide from Metal fans in general has been phenomenal and very humbling, a (nightmarish) dream come true so far. The reviews have been outstanding but we’re striving to move ourselves further both musically and as people, we read everything and take it all on board regardless of whether it is positive or negative.

Devastator: We’ll always keep ourselves to our roots but of course grow as musicians and possibly experiment with other influences which will naturally affect our music but who really knows? This album isn’t even out yet, ha!

11. What are you listening to nowadays?

Devastator: Firstly a lot of contemporaries in the scene worldwide, Hellripper, Wraith, Bastardizer, Cruel Force, Hellfekted amongst others; Black Thrash on a global scale is rich with talent so go listen to them, you won’t be sorry. Of course our friends in the local scene too, Abduction, Pemphigoid, (Fuck) Beyond Your Design but as of right now at this very moment we listening to classic Deep Purple!

Devastator: Well, firstly thank you for reaching out to talk to us! Our new album ‘Baptised in Blasphemy’ is out on Clobber Records on July 10th 2020, you can pre-order it now over on their website clobberrecords.com. You can find us on all forms of social media and keep an eye out on our official webstore devastatorblackthrash.bandcamp.com for the BRAND NEW ‘Baptised in Blasphemy’ merchandise. Lastly, thanks to everyone for their support so far and we’ll see you out on the road (hopefully!) soon. 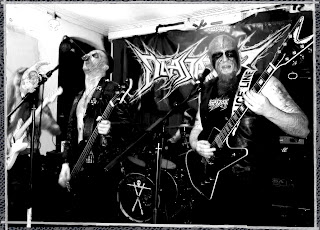 www.facebook.com/devastatorblackthrash
Posted by OccultBlackMetal at 9:26 PM