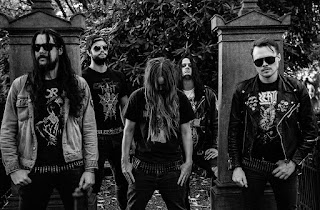 1.Can you give us an update on what has been going on with the band since the recording of the new album?
- for various reasons it took some time to complete the album, and we took a little break after completing the album to recharge our batteries a bit. We intended to rehearse in order to do gigs and write New material, but then covid-19 happened. Finally we're allowed to rehearse again, so now we're writing some riffs and stuff, and trying to come up with some cool ideas for future stuff.

1.You have a new album coming out in August, musically how does it differ from the stuff you have released in the past?
- I think we focused more on songwriting this time around, and not just on playing as fast as we can. The new material is tighter and sounds a bit darker and evil than our old material.

1.This is also your first album in 6 years, can you tell us a little bit more about what has been going on during that time frame?
- Our old lineup fell apart somewhere around 2015. So the band was on hold for a while before we decided to give it another shot. It took time to rebuild, and find the right people, which can be hard in a small town like where we live.

4.Some of your lyrics touch on satanism and occultism, can you tell us a little bit more about your interest in those topics?

Henning: : I have had a fascination for the occult, cosmic horror and satanism for as long as I can remember. Mostly on an allegorical or metaphorical level. As the lyrical themes on this record are very twisted and depraved, it is therefore very natural for me to incorporate various symbolism and imagery from these subjects in our lyrics.

- You would have to ask our old vocalist

1.What is the meaning and inspiration behind the name ''Toxik Death'?
- I'm not sure anymore, in 2003 we were all pretty much kids. I don't think there is any particular meaning behind it other than that it sounded cool at the time.

1.Can you tell us a little bit more about the artwork that is presented on the new album cover?
- We got in touch with Marcus from Obsessed by cruelty, since we already knew he made cool designs for bands. We told him that we wanted something that looked like the bastard child of old Slayer and Sepultura.

1.What are some of the best shows that the band has played over the years and also how would you describe your stage performance?
- We really never played that many shows, but opening for Toxic Holocaust both in Stavanger and Oslo comes to mind as good gigs. We were all well rehearsed and didnt get hella wasted before the show. I dunno about stage performance, we dont think much about it. We just play

1.The new album is coming out on 'high Roller Records' how would you compare working with them to your older label 'Demonhood Productions'?
- Demonhood was a good label for sure, they really championed the band. The advantage of being on High Roller is that they are a well known and well respected label. Hopefully that enables us to reach out to more people with our new record.

- I don't know to be honest. We never paid much attention to it really. Hopefully there's some maniacs out there that'll appreciate the new album

- Too early to tell really, we have just recently started fucking around with some new material. But I doubt we will reinvent the wheel somehow haha.

12.What are some of the bands or musical styles that have had an influence on your music and also what are you listening to nowadays?
- Slayer, Sepultura, Metallica, Possessed, Exodus, Bathory, Sodom, Razor, Destruction, Dark Angel, Kreator to mention a few. Of course there are too many to mention, but those are a select few.

We all listen to a lot of different musical genres. I was just listening to Tangerine Dream earlier today, which isn't very metal at all.

Cheers for the interview!

Posted by OccultBlackMetal at 1:44 AM