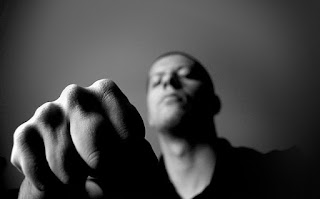 1.Can you give us an update on what is going on with the musical project these days/
-Active as always, writing, recording, I never stop, so many ideas and not enough time to produce them.
Also working to get Entity on the road, this Corona thing was really unexpected for everyone so lets see how that turns out eventually.

2.Your recent album came out in 2019, musically how does it differ from the stuff you have released in the past?
-Every album I write I try do something better than the previous. On the first one (Idol Icon Black) I was learning how get the workflow going to be able to make good songs all by myself. One thing is to have an idea but to make that work and sound good is really hard if you have no clue on how to start.
On the second one (Dead In The Water) I had a little better know-how so it was easier to get it done, also I´m always trying to change my gear around so the music
doesn´t sound the same.
On Entity I took a little more time to work on everything, instruments, music structure, lyrics, so I´m really happy how it turned out. I wouldn´t change a thing.
But mainly I think I was able to stablish my style, people are able to listen to a song and identify it as The Ogre.

3.The lyrics on the new recording are a concept album, can you tell us a little bit more about the story you covered on the new album?
- There is a theme, an identity, the concept is the menacing feel to it. When I began writing the album I started researching ghost stories, unexplained phenomena to get into the right mindset and focus on the main inspiration for the album. I guess it´s more evident on songs like Macabre Hooded Spectre,
Violent Poltergeist Manifestation or Phantasmagoria.
It isn´t a "concept album" on the traditional sense like Queensrÿche´s Operation Mindcrime or King Diamond´s Voodoo that there is only one storyline thoughout the whole album.
I consider it to be more like a book of horror stories, every song has a story of it´s own but somehow part of a bigger thing.

4.Your have mentioned some interests in the occult and mythology, can you tell us a little bit more about your interest in those topics?
- I really enjoy reading about hidden rituals, old forbidden books and as you delve deeper into the subject you can see a direct parallel to mythology, sometimes even with religion, conspiracy theories and ufos like an ancient aliens kind of thing.
I always try to write to songs with a lyrical theme in mind, to get the exact soundtrack to the story. For instance, the song They Return is a real ritual of resurrection, 3 Nights Of Hell is a ritual for punishment, Black Goat Of The Woods is about witches and clairvoyance, the song Cultus Mortuorum came from a book about macumba (the brazillian version of voodoo) and so on.

5..You also mentioned some of your lyrics are inspired by literature, which novels or authors have had an influence on your songwriting?
- There are A LOT of good stuff out there, Edgar Allan Poe and HP Lovecraft are amazing but on the occult side I drew inspiration from Agrippa, and books like Malleus Maleficarum,
Compendium Maleficarum, Le Dragon Rouge, Kingdoms Of Flame and the trilogy from the same author. On Entity there was a few specific books that really inspired me,
Violent Poltergeist Manifestation is about a a real account of a haunted house and the torment that the family living there went through, the book is Haunted One Family´s Nightmare.
But the inspiration for a theme can come from anywhere, the song Vermin for instance, is basically a description of a decaying body from a murder.
At the moment I´m reading a book about spiders and I already got a couple of ideas for a song, this is the great thing about metal, you can talk about anything, it´s just something you develop along the years.

6.What is the meaning and inspiration behind the name 'The Ogre'?
- It was a name that came up to me because it sounds like my real name, and it´s different from any band I´ve heard.
A few years ago I had a couple of songs that didn´t really fit the music style of the band I was in so I felt I needed a side project to use them, it´s really frustrating when you come up with something that you feel it´s good and you can´t use it, so with the ending of that band I felt really free to explore and "reinvent" in a way my own music style. I played around with a couple of names and logos but The Ogre just looked and felt right.

7. can you tell us a little bit more about the artwork that is presented on the new album cover?
- I consider the artwork as important as the songs to get main atmosphere across to the listener. I take it very seriously, usually I develop the album cover before the album is done. This is one of the advantages of doing everything, once you are in the writing/recording process the artwork comes naturally.
With Entity I felt it needed to show something weird and "ghostly" in a closed environment. The movie Evil Dead had the ambience that I wanted so therefore the similarity.

8.With this project you record everything by yourself, are you open to working with other musicians or do you prefer to work solo?
- On my previous band everyone was free to input their ideas, it was good in a way, you had more material to work with and sometimes
an idea or a riff that you don´t like may be someone´s favorite part.
On The Ogre I have more control and I feel that the songs have more personality because it comes from the same source, on that sense I think it will remain as it is, I will write everything
but hey, never say never right?
At the very beginning of The Ogre I tried playing with a couple of guys that I knew from back in the day, although they´re great musicians it did not work. It was never my intention to do everything but if you can´t find the right guys to work with just go and do it yourself.

9.On a worldwide level how has the reaction been to your music by fans of underground metal?
- It´s been amazing, way better than I expected, every once in a while I see a hater but I honestly don´t give a fuck.
This is my music, I work really hard to put out the best that I can and most people can see that.
I write what I feel it sounds good and I share with anyone that likes metal. In a worldwide metal scene like today I see that what "sells" for most labels are clowns and posers, come on we all see the circus that the metal scene has become, there are a million bands wearing costumes, masks, veils, candles, uniforms and what-not with an whatever sound copy of a copy of a copy, and this is exactly why I´m proud to be an underground musician with awesome REAL people that listen to what I produce.

10. Where do you see yourself heading into as a musician during the future?
-I really want to put a band together for a tour, I think these songs deserve to be played live.
Musicwise I want to keep evolving, trying out different song structures, instruments and sounds, so many ideas to work with.
When I have more time and money I hope to work more with music videos also, it´s an important tool to get your art across to people, may it be sonically or visually.

11.What are some of the bands or musical styles that have had an influence on your music and also what are you listening to nowadays?
- I´ve always listened to a lot of bands from hard-rock to extreme metal,
the classics are always on my playlist, Judas Priest, Megadeth, Death, Iron Maiden, Morbid Angel, W.A.S.P., Slayer and so on.
Lately every week there is a favorite band, Dark Funeral, Septicflesh, Symphony X, Carcass, a cool italian band called Fulci that a discovered a couple of months ago, soundtracks are always awesome from composers like Hanz Zimmer, Junkie XL, some synthwave artists...so yeah I´m all over the place.

12.Before we wrap up this interview, do you have any final words or thoughts?
- First of all I would like to thank you guys for giving me the opportunity to talk about my music and to let everyone know that next year a new album will be out, it´s already written,
I´m just working on a few lyrics and vocal melodies to have everything a 100% done.
Thank you again and rock on brothers!

Posted by OccultBlackMetal at 3:41 PM