1.For those that have never heard of you before, can you tell us a little about the musical project?
1.I-For this project, there really aren't any rules. It's raw, dirty and old school.

U- Raw Black/Thrash, in my opinion.


2.So far you have released a demo, can you tell us a little bit more about the musical style yu went for on the recording?
2. I-The style I was going was black/thrash and speed metal. Truthfully those two songs aren't really my favorites, the other songs we have I'm definitely more proud of.

U- These tracks were the first ones recorded, so naturally we released these first.


3.All of the other band members are also involved with other bands or musical projects, what is it that you bring into the music of 'Christrape' that you are not able to do with your other groups?
3. I-Not too much has changed with this project. With this project there is just a higher focus on Thrash/speed metal.

4.A lot of your lyrics cover satanic themes. can you tell us a little bit more about your interest in the dark arts?
4.I- I would be considered Agnostic, but I have read into the Göetia some and I have attempted some spells. As for myself being and actual Satanist, I'm not. I have more belief in Alchemy.

U- I have a strong belief in Satanic philosophy,  and also practice in the black arts. Chaos magick, Enochian magic, etc.

5.What is the meaning and inspiration behind the name 'Christrape'?
5. I- When it comes to the name it was a choice between two options... I'd personally would have love to have more options but it's hard finding/thinking of a name. It was easy back in the 70s/80s to name a band Destruction, Satan, Black Hole, Tormentor, etc... Pretty much have to think hard of something that isn't just gonna rip off another band.


6.Can you tell us a little bit more about the artwork that is presented on the demo cover?

6. I-The artwork and the whole release was rushed, Unholy is truthfully better with art. The next release is sure to have better art work and won't be as rushed.

U- Agreed. We did rush the release, the next one will be better, as we will have proper artwork, better recording. And we are also talking about re-releasing the first demo with proper artwork, and some extra tracks.

7.Currently there are only 2 member in the band, are you open to expanding the expanding the line up or do you prefer to remain a duo?
7 I- It should remain as it is. I've had many other offers of people wanting to be in the band, but there was no commitment or were mainly focused on other projects which I do understand that... I guess. If we were to ever play live again which I doubt, we would need a bassist, vocalist, and second guitarists. Mainly just a bassist and a really good offer since I've lost interest in playing live anyway. It's nice seeing Covid 19 eliminating all these scheduled shows and seeing people ass hurt about it

U- I personally have no desire to bring anyone else into Christrape, unless they are someone who absolutely fits the band, and understands what we are about.

8.You also did a Slayer cover on the demo, what was the decision behind doing your own version of one of their songs?
8. I-Well, there is a bunch of classic thrash songs I'd like to do eventually. That song and Black metal war are the only songs I can fully play through. Plus that song is just pure evil, Old Slayer killed! Glad they're done though.

U- This was one of those cover songs that we just jammed, and it turned out that we could play it all the way through. Of course it would have to be early Slayer. Nothing after Hell Awaits, in my opinion.


9.On a worldwide level how has the reaction been to your music by fans of black, death and thrash metal?
9. I-It hasn't really had a big reaction yet due to just having two songs out. A lot of people I show this too, they tend to like it, but I've not noticed any big reaction from it.

U- Christrape is still underground. In our area, we have only played a handful of shows, to very small crowds. So Christrape has yet to make a name for ourselves with this band. But this will change. There is much to be done with Christrape.

10.What is going on with some of the other bands or musical projects the main person is a part of?
10. I- With Apocryphal Revelation... A pretty big update is coming along with an actual full length. I'm Also starting a solo Project soon, since I picked up drums.


11.When can we expect a full length and also where do you see the band heading into musically during the future?
11. I- Not sure about a full length as of now, but as moving forward musically it'll get more doom elements.

12.What are some of the bands or musical styles that have had an influence on your music and also what are you listening to nowadays?
12. I-I've always been into to German Thrash and the Swedish melodic Blackened/death metal. But to keep it short Destruction, Iron Angel, Mortuary Drape, Dissection, Dawn, Vomitor, Black Hole, Destrcuctor, and the list will go on and on. Listening to now.... I've been stuck on Hallas and Black Magik SS new release for the longest time but I've been all over the place recently.

U- Of course, all of the ancient ones before us. VON, Beherit, Profanatica, Demoncy,  Hellhammer/Celtic Frost. I could go on and on. But as far as new music, the Perverted Ceremony/Witchcraft split is amazing, and so is everything else from both of those bands. Also, everything from Black Blood Invocation, Death Worship, Moenen Of Xezbeth, Cult Of Eibon. And the new Profanatica rips, too much to mention.

U- Hails to Blackened Death Metal Zine, and to all of our local Kentucky bands/ comrades of the real Black Metal underground. Ave Satanas. 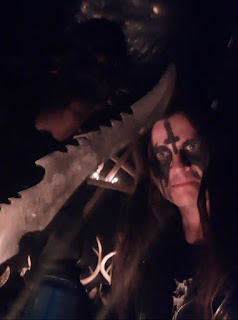